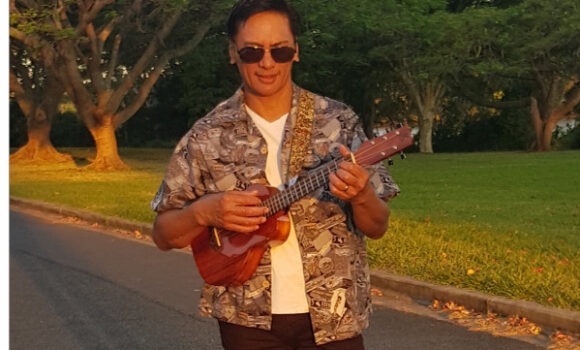 Brisbane based guitarist Vic Kena, has been playing professionally for over 30 years. Just over 10 years ago Vic discovered that he could play all the songs he knew on guitar, on one of his kids ukulele. He immediately took a liking to the ukulele and 2mths later formed a 7pc ukulele group ‘The Australian Ukulele show’. One of the show’s highlights was performing at the Byron bay Bluesfest in 2017 where one of Vic’s heroes Jake Shimabukuro joined them for 1 song.
Vic’s keen sense of hearing coupled with his playing technique makes it very easy for him to pick up and learn songs. This makes Vic very entertaining to watch as you don’t know what he is going to play from one song to the next. Regardless of this you will always be guaranteed and great show!
During his performance Vic will also be joined with some members from his brand new community group The Imago Ukulele Express, he formed specifically for this years ANZAC dawn service hosted by The Currumbin RSL. This group is made up mainly of ukulele enthusiasts to which have not even played in front of anyone.
This year, Vic closes the Brisbane Ukulele festival with 2 of his muso mates. Brad Wild (bass) & Gavin Manniku (keys). They will be on stage at 7-8pm June 11th 2020 at King George square.
Vic is proudly endorsed by Kanile’a ukulele.

SPRUKE On The Square

SPRUKE on the Square is a FREE event.

Back to PERFORMERS at SPRUKE 2022 page